These past few days have been very busy! On Friday, May 25, 2012, I finished my first week of classes–which is hard to believe only 9 more to go–and also traveled north to the Main Campus of the University of Shanghai. There we meet a lovely group of about 10 Chinese students who showed us around the campus and took out to a great dinner. (Have I mentioned how amazing the food is here!?!) There campus was spectacular, it was larger than any other campus I had ever seen not only in sheer size of the property but the buildings themselves were huge, their campus was home to the largest library in China; that being said,  you can imagine just how large the university had to be.

On Saturday, May 26, 2012 (Happy Birthday Kevin Tighe!), our group did a good bit of traveling around the city of Shanghai. 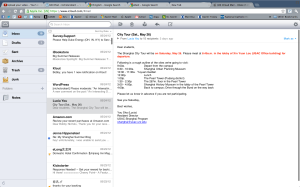 As you can see from the schedule we hit a good number of the main tourist spots in the Pudong district–a very serious nap took place after our travels. The coolest part about our travels was that Fei Fei and You Sha came with us during our tour, which is great because we got to get to know them more than just teachers or program directors. The Yu Yuan Garden was a really neat place, but it was crowed with tourists and made it difficult look around and enjoy the sites and surrounding shops. After our brief tour we had a great lunch that You Sha picked out, including this these bananas that were covered in burning hot hard candy that required them to be dipped into water to shock the syrup before you could eat it. Must have them again! (This is the closest picture I could find on the internet. No offence to the photographer, but this doesn’t do it justice.) After, lunch we hit up the Pearl Tower which I talk about in the video, so check that out.

But today, Sunday, May 27, 2012, has been probably the most fun so far, because I spent the morning teaching English to three 9 year-old Chinese Children! I honestly had no clue what the hell I was doing, but I just jumped right in and the children were so very kind, eager, and willing to learn–did I mention that there were also full of energy! Teaching them was not at all difficult because they were very well behaved and extremely intelligent, there English was on par, if not better than most American 9 year-olds. I talk a lot about them in the video so I’ll spare you the reading.

Below, are a selection of pictures that I have taken from the past several days.